The Stellar Consensus Protocol: A Federated Model for Internet-level Consensus 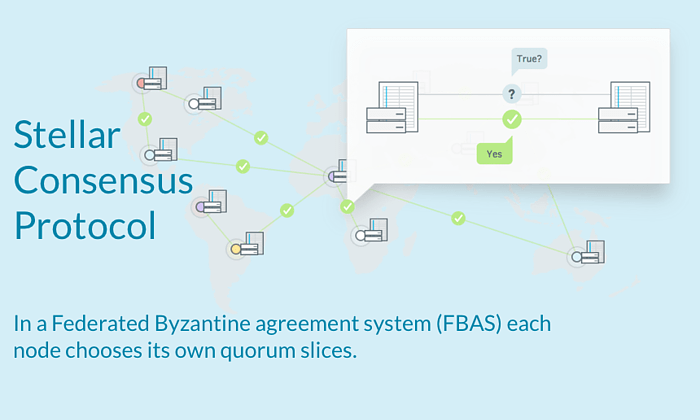 Stellar Consensus Protocol (SCP) is an open Byzantine agreement protocol resistant to Sybil attacks, proposed by Stellar foundation. It allows Internet infrastructure stakeholders to reach agreement on a series of values without unanimous agreement on what constitutes the set of important stakeholders. A big differentiator from other Byzantine agreement protocols is that, in SCP, nodes determine the composition of quorums in a decentralized way: each node selects sets of nodes it considers large or important enough to speak for the whole network, and a quorum must contain such a set for each of its members.

Distributed consensus: In a distributed system, all nodes must periodically update the state that they’re replicating — for example, a transaction ledger. We identify each update by a unique slot; a consensus protocol ensures that all nodes agree upon slot content.

Tolerating Byzantine failure: We want to ensure consensus even when individual nodes act arbitrarily, behaviour known as Byzantine failure. To tolerate Byzantine failure, SCP is designed not to require unanimous consent from the complete set of nodes for the system to reach agreement, and to tolerate nodes that lie or send incorrect messages.

Federation: In a distributed system, a quorum is a set of nodes sufficient to reach agreement. Federated Byzantine agreement introduces the concept of a quorum slice, the subset of a quorum that can convince one particular node of agreement.