Tendermint is software for securely and consistently replicating an application on many machines.

To simply put Tendermint is a software which can be used to achieve Byzantine fault tolerance (BFT) in any distributed computing platforms. From managing infrastructure to designing a distributed database, we can use Tendermint.

The ability to tolerate machines failing in arbitrary ways, including becoming malicious, is known as Byzantine fault tolerance (BFT). The theory of BFT is decades old, but software implementations have only became popular recently, due largely to the success of “blockchain technology” like Bitcoin and Ethereum. Blockchain technology is just a reformalization of BFT in a more modern setting, with emphasis on peer-to-peer networking and cryptographic authentication. The name derives from the way transactions are batched in blocks, where each block contains a cryptographic hash of the previous one, forming a chain. In practice, the blockchain data structure actually optimizes BFT design. doc

Tendermint consists of two chief technical components: a blockchain consensus engine and a generic application interface. The consensus engine, called Tendermint Core, ensures that the same transactions are recorded on every machine in the same order. The application interface, called the Application BlockChain Interface (ABCI), enables the transactions to be processed in any programming language.

How to write applications using Tendermint?

As you can read from the official docs, Tendermint will not handle your keys, encryption or business logic, just the consensus and that's it. 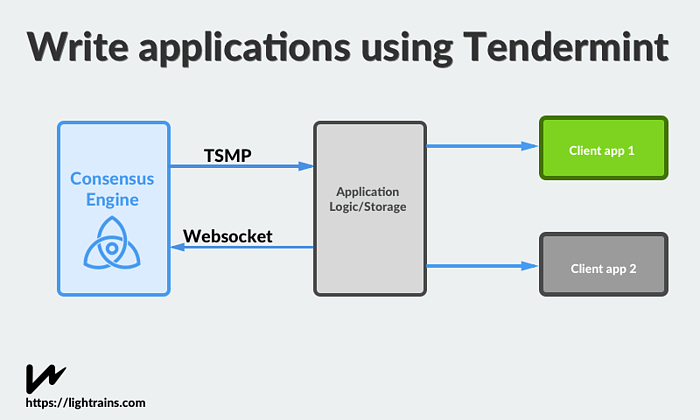 The ABCI design has a few distinct components:

To make a comment, please send an e-mail using the button below. Your e-mail address won't be shared and will be deleted from our records after the comment is published. If you don't want your real name to be credited alongside your comment, please specify the name you would like to use. If you would like your name to link to a specific URL, please share that as well. Thank you.

Metaverse, NFT and Blockchain in Sports

What are Non-Fungible Tokens?